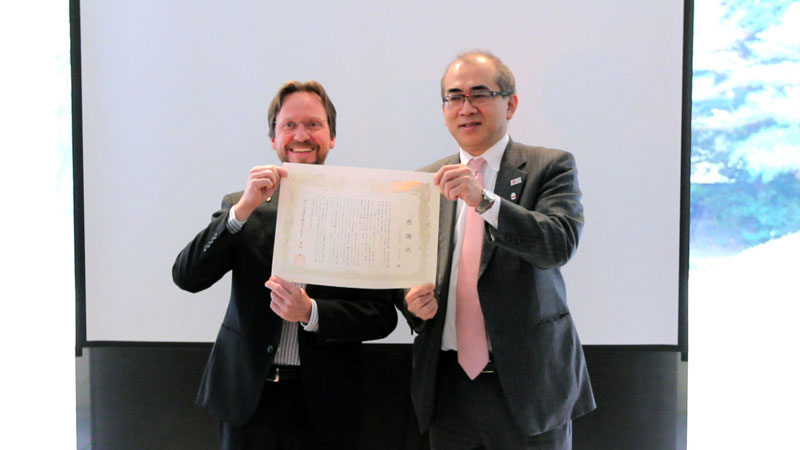 “I wanted to give something back“, said Thomas Koehler in his speech at the Swiss Embassy in Tokyo, where the invited guests and the Japanese media gathered. “I wanted to say thank you.“ On this day the Japanese Government responded Thomas with an official certificate of gratitude.

March 11th marks a turning point in the career of Swiss travel agent Thomas Köhler. After the devastating Tsunami and the nuclear disaster in Japan he loses all his customers, and eventually his job. “All I did was handling cancellations. I knew I was going to lose my job“, recalls Köhler the days and weeks after the devastating disaster.

One month later Mr. Koehler decides that he wants to help. He wants to show that Japan is much more than the nuclear accident in Fukushima. Japan is worth visiting. Thomas Koehler works out his project Walking Through Japan, which he starts on August 1st, 2011 at the northern tip of Hokkaido. In only 5 months he walks all the way down, over 2900 Kilometers, to the southern tip of Kyushu. During his journey Koehler gains the attention of the media. His devotion to look forward picks up quickly. The Japanese became fascinated by the walking Swiss guy. Eventually the Japanese Government decides to honor him.

In the Frenzy of Flashing Cameras

On February 6th at the Swiss Embassy in the frenzy of flashing cameras, Hiroshi Mizohata, the highest tourism representative of Japan, hands Thomas Koehler an official certificate of gratitude for his merits for Japan after the Great Earthquake.

At the end of the official ceremony Mizohata presents Koehler a personal gift. A good luck charm from the Fukushima prefecture. “I gave this keepsake to Lady Gaga and Justin Bieber. Now I give one to you, too. We are expressing our deepest gratitude for your achievement, Mr. Koehler.“

The Skipjack Okiagari Koboshi from the Aizu region in Fukushima is a symbol of resilience and endurance. Mizohata made it popular when handing it over to Lady Gaga after a charity concert in Japan. The Japanese Government awarded the American singer as well for her achievements after the Great Earthquake.

The Documentary is Next

A life changing experience has come to an end for Thomas Koehler. Nevertheless, his journey has not ended here. “My commitment for Japan continues. For now, I am looking forward to seeing the documentary“, concluded Koehler in front of the media at the Swiss embassy.

After the ceremony the invited guests and the press had exclusive opportunity to watch the trailer of the documentary film Negative: Nothing – Step by Step for Japan. The film will have its premiere later this year. The trailer will be online in the next few days. For more information please visit the official website and facebook page.